Why go and see it?
A smash hit musical spectacle by Queen and Ben Elton featuring Queen’s biggest hits!
The global phenomenon returns to the UK!

Production shot
The worldwide smash hit musical by Queen and Ben Elton returns to the UK. The multi-million-pound show dazzles all the senses in breath-taking style. Guaranteed to blow your mind, this musical phenomenon is not to be missed!

Since 2002 over 16 million theatre goers in 19 countries have thrilled to this awe-inspiring production. With 24 of Queen’s biggest hits delivered in a show that boasts the scale and spectacle that marked the bands’ legendary live performances. 24 of Queen’s greatest hits, including Radio Ga Ga, Killer Queen, Bohemian Rhapsody and, of course, We Will Rock You! 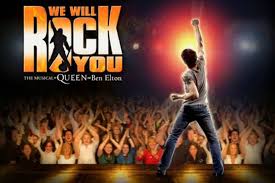